Sorry for the delay since the last post.
Just over a week ago, we got an unexpected phone call saying that Grandpa Eatherton was going in for an angiogram. Within a matter of hours, we were dealing with the reality that he was going to have open heart surgery to relieve a blockage in his aorta. As scary as all of this sounds, it was a blessing, and a miracle, that we are able to write this blog post.
Grandpa had 80% blockage in one of his main aortas that almost never gives any warning signs. For whatever reason, he started to get chest pains on the treadmill in the last few weeks....that was miracle #1. Miracle #2 was when he proactively went to the doctor to say something was wrong. They caught the blockage in the stress test, an angiogram confirmed it, and the bypass surgery repaired it.
Fast forward a little over a week, and he's now resting comfortably at home after undergoing triple bypass surgery. Within 24 hours of surgery, he was out of his bed, breathing on his own, and totally aware of his surroundings. Just a few more days after that, he was eating, walking, and climbing stairs. Just a few more days after that, he was on his way home.
He's going to have a long road to recovery. However, it's a small price to pay given the alternative. We will all keep him very active and ensure that he eats well. Hopefully he'll be back on the treadmill and playing golf later this year. He's very thankful for all of the well wishes...he received a ton of support while he was in the hospital, so thanks to you all.
Posted by Matt Eatherton at 7:37 PM 2 comments:

Brady loves being outside! Whether it's going for walks in the stroller or just sitting out on the porch, he definitely likes getting out of the house. I can't say I blame him! It was a tough winter, but we're looking forward to spending the Summer outside with Brady now that he's bigger and able to take it all in. Hopefully we'll get to the zoo in the next few weeks!

He's very interested in everything we eat and drink; he tries so hard to take a taste! We're still trucking along with the cereal and tried oatmeal for the first time this weekend. Doesn't really like that either. Can't wait to start giving him fruits and veggies, hopefully he'll like those more than the grains!

We got our very first cold over Memorial Day weekend and we're still fighting off the end of it. Lots of boogies! But he handled it like a champ for the most part and slept, and slept, and slept! He's also chewing EVERYTHING and drooling a ton, so we are hopeful that his first tooth breaks through soon.

We're taking our first road trip to St. Louis this weekend to spend some time with Matt's family. We're also going to see the Baileys and Kathy and Sam... very fun! We'll post pics from the trip when we get back. For now, enjoy a few from the last 10 days or so... 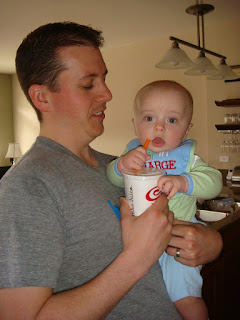 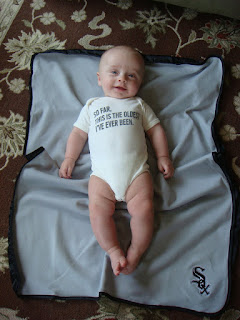 It's true, every time he wears it 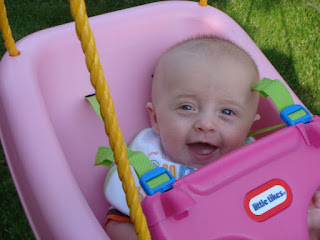 Swinging at the Durkins 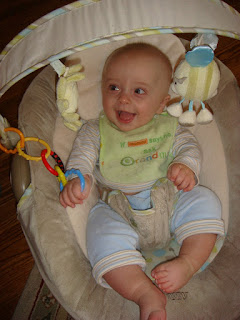 Such a happy boy! 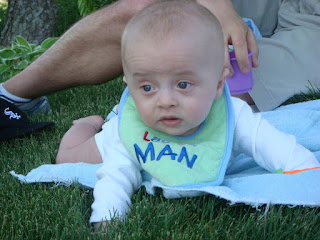 Touching grass for the very first time!
Posted by Heather at 7:38 PM No comments: