Brady has been a talker for as long as I can remember, so he rarely shocks me with the things he says. But lately, I have doubled over in laughter at some of the comments that have come out of his mouth. I'm so disappointed that I'm usually the only one to hear these bits of wonderfulness, so I decided that I just had to share them on here. Maybe they won't be as funny "out of the moment", but I still get a kick out of talking about it over and over. Here are two recent conversations between B and M (Mom).
Last week, while walking to the library...
B: "Mom, what are those things?" (pointing to pipes/valves sticking out of the ground near the apartment building across the street)
M: "I think those are water pipes or some sort of valve for the apartments".
B: "What are they for?"
M: "I'm not sure. Maybe the firemen use them to help put out fires." (I never claimed to be smart.)
B: "Oh. We can't touch them Mom?"
M: "No, we can't touch them Brady. Only firemen."
B: "Oh. You have to have special skills?"
M: No comment. Just me rolling on the ground, laughing at the way my 2.5 year old just said "special skills". No clue where he heard that phrase.
And just today, in the kitchen after lunch...
M: "Brady, do you know the (hand clapping) game where you sing "Down by the banks of the Hanky Panky, where the bull frogs jump from bank to banky..." (accompanied by a one-man demonstration of the game).
B: "Is that on your phone mom?"
M: "No, it's not a game on my phone. It's a hand clapping game."
B: "Oh, do you find it online?"
Good Lord. He's definitely part of the Internet Generation!
I hope that made you chuckle. I'll be sure to share the next crazy thing Brady says or does!
Posted by Heather at 1:10 PM No comments:

This One Is A Framer!

Brady's first drawing where "people" look like people! We couldn't be prouder. 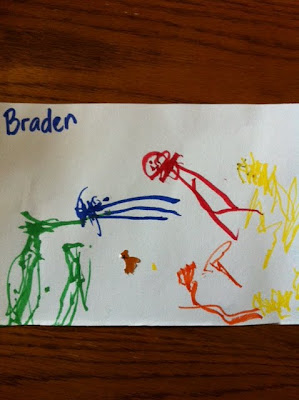 (That's Matt and I in the red/blue, just in case you needed clarification).
Posted by Heather at 9:09 PM No comments: 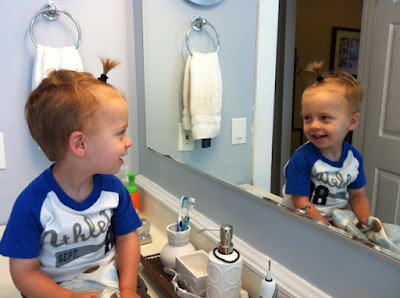 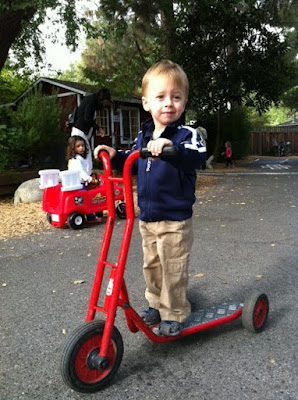