Some days, I can't believe Cole is 2 months old already. But then there are other days when I think, "it's only been 2 months?!" Not that I'm not enjoying every day with this little snuggle bug, but because I feel like I've known him forever!

Cole has been very busy these last 4 weeks. Just like his big bro, his mouth is moving a mile a minute! I love our daily "conversations" (and have almost every one on film, no lie!) His sounds of the moment include, "goooo", "gaaaarrr", and "ahhh-ahhh". And, I kid you not, the boy can already say "hi". Pure genius. His vocal stylings really max out during tummy time. He opens his mouth super wide and makes all kinds of noises that I can't really describe. He is having no trouble finding his voice, that's for sure!

Cole is really becoming much more aware of his surroundings and loves soaking it all in. He is also getting more tolerant of sitting in his Boppy chair and "playing" by himself, instead of wanting to be held during all his wakeful hours (phew!) His two favorite pastimes of late are watching his big brother Brady do anything and everything, and sucking on his hands! Call me crazy, but I SWEAR he's teething already. Brady didn't get his first tooth until he was 7 months old, but between the constant hand sucking and all the drool (so much drool already!!), I just have this feeling we'll be seeing some pearly whites sooner than later.

The best news of the last 4 weeks is that Cole actually slept through the night! Yep, he slept from 10 or 11pm until 5 or 6am not once, not twice, but for 6 days in a row!! Of course, that all came to an end last night, but I am so thankful for the break and hope we'll be on course to getting more regular sleep soon! I actually just cracked open Healthy Sleep Habits, Happy Child by Marc Weissbluth and plan to start sleep training him at 10 weeks. Fingers crossed he'll be just as good of a sleeper as his big brother!

Cole's 2 month check up is scheduled for next week, so I will post his stats after his appointment. My guess is that he's weighing in at a healthy 14 lbs, but we shall see! He's a very happy, healthy, BIG boy, but we love every inch of him. 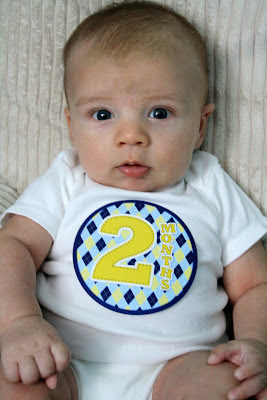 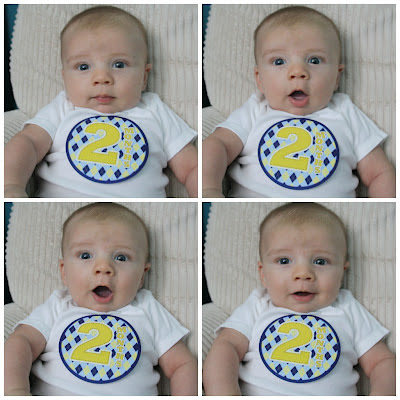 The many faces of Cole! 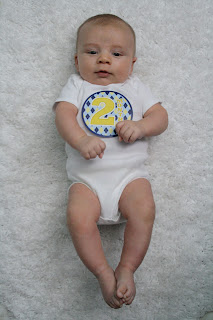 Legs are getting straighter 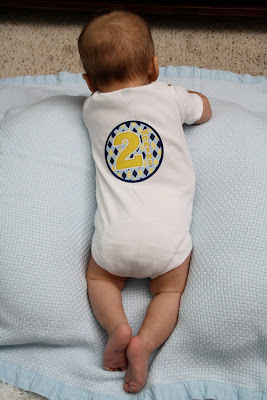 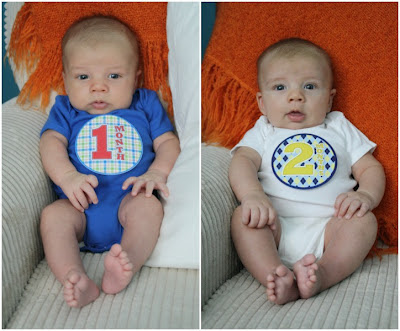 One Month/Two Month Comparison
Posted by Heather at 11:10 AM 2 comments:

For the last few weeks, my friend Jen at Leilaland has been writing a post every Friday called "The Great List", which highlights the positive points from her week (this is an ongoing meme, started by Betsy at Betsylife). I've enjoyed reading her lists and have wanted to get one of my own up too, so now I am!

It's so easy to get bogged down in all the difficult and not-so-rosey moments of being a SAHM. I could give you a list of 50 things that sucked/went wrong/never got accomplished this week... but let's face it, you don't want to read about them (and I'd reallllly rather pretend they didn't happen). It's nice to take a moment and reflect over the good things that happened, otherwise they could get overlooked altogether.

So, here are a few highlights from our week:

1. This past weekend was the Mountain View Art & Wine Festival. The Fest takes place once a year, every Sept., and is literally footsteps away from our house. It's a really cool all day event that has... you guessed it, art and wine. And beer. Yummy beer! There are kiddie rides, bands, and some of the most delicious garlic fries! The weather was gorgeous (of course!) and it was so nice to get out of the house as a family and walk around and just enjoy ourselves. And drink a beer. Outside. Did I mention that?! It was a wonderful weekend! 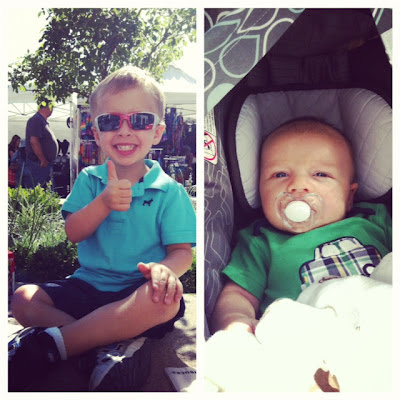 2. We got not one, but TWO Bears games on TV this week. Neither game was worth writing home about (one win/one loss), but the fact remains that we got to watch them play TWICE already!! That's definitely a luxury around here as we don't get many Bears games in NorCal. Cole was really excited to sport his Urlacher jersey (hand me down from big bro Brady), even though Dad would have preferred to see him in his Roethlisberger jersey instead. Maybe this Sunday. 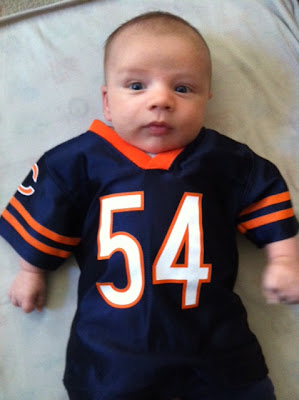 3. Papa came to visit! Certainly THE highlight of the week. My Dad was in Sacramento on business, so he rented a car and came to visit us on Wed. night. Even though he was here for less than 24 hours, Brady was over the moon to see him and we were happy to have him here. I was glad that he got to see Cole before he got too big, and hope that he and my Mom can come back and visit sometime in November as well. 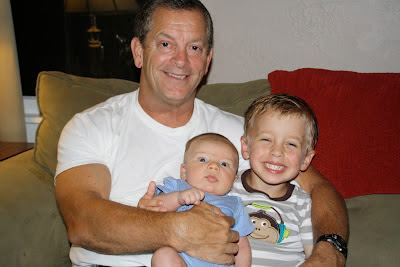 Now that the weekend is upon us and we're all ready to kick back and relax, I hope you too can find a moment to celebrate the great things that happened to you this week!
Posted by Heather at 2:36 PM 2 comments: 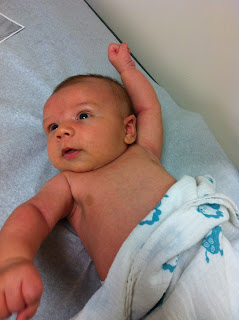 Last week we took Cole for his one month well baby check up. This was the first time we'd been back to the doctor's office since he was 7 days old, so we were curious to see how much he had grown.

Given the fact that newborns are supposed to gain approx. 1 oz per day, I assumed he'd weigh in somewhere around 10 and half lbs. Matt thought he would be bigger than that; his guess was 11 lbs even. Imagine our surprise when our little Snogger (rightfully nicknamed, we can all agree now) weighed in at a shut-your-mouth-my-one-month-old-baby-weighs-what?! 11 lbs 14 oz!!!

Even more surprising, this only put him in the 86 percentile for weight. I'd love to see what those babies in the 99 percentile look like (and their poor Mamas, for that matter!)

I, of course, came straight home and opened up Brady's baby book, just to see how they compared. Brady weighed 7 lbs 13 oz at birth (1 lb and 5 oz less than Cole) and was only 9 lbs 12 oz at one month (2 lbs and 2 oz less than Cole). And what I found to be even more humorous was that Brady weighed 12 lbs 1 oz at his TWO month appt., only 4 oz less than Cole weighed last week (and as much as I'm sure he weighs right now, if not more).

Ummm, can you say future linebacker?!

I'm happy to report that his other stats are in more proportion to his overall size, which was not the case with Brady. Even though Brady was 21 in at birth, he was only 22 in at one month. Cole was 20 in at birth, but is already 22 3/4 in at one month (88 percentile). And let's all breath a sigh of relief that even though he too has a big noggin, it's only in the 98 percentile (vs. 105% for Brady).

What really matters though is that he was given a clean bill of health! Doctor said he looks great. Only one shot (Hep B) and he only cried for a few seconds. His two month appointment brings a handful of vaccinations, so Daddy better come next time (Mom doesn't do too well with shots!)

Cole was being quite the babbler during his appointment and the doctor said those 7 little words that we also heard from Brady's pediatrician... "He's going to be an early talker!" Boy did that turn out to be true. I guess if you want to hang in this family you have to find your voice and use it! 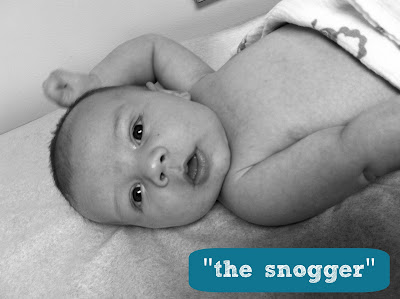