Just because we haven't updated the blog in awhile doesn't mean there isn't anything going on. It's actually quite the contrary... there's so much happening here that we can't find time to tell you about it! As soon as Brady does something amazing for the first time, he trumps himself by doing something else for the first time right after it. I guess that's how his first year is going to be!

About 3 weeks ago, my Mom, sister and I took Brady to the Picture People in the mall to get a couple of photos taken for Matt for Father's Day. There, in front of the camera, he decided to sit up on his own for the very first time-- no support. It was break taking! And because the moment was caught on film, we of course had to buy a bazillion pictures. It was a good day for the Picture People! Since then, he's been able to sit a little longer on his own every day. Just yesterday he sat for several minutes and even played with some toys before he plopped over. He looks like such a big boy now. 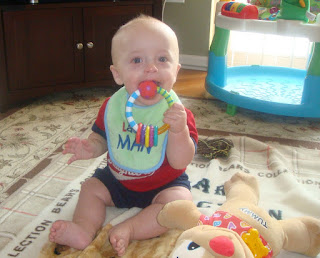 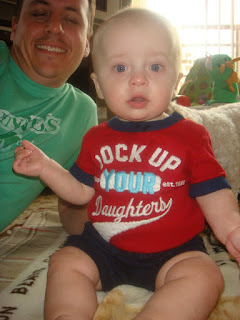 Lock up your daughters!
And Brady isn't stopping at sitting... no sir. He's already up on all fours rocking back and forth. Much to the chagrin of his mother, this little man will be on the move very soon. Why can't he stay a baby for just a little while longer?!

Another fun milestone to note... Brady began eating vegetables this week! He's been eating cereal for the last month and a half, but we waited until he was 6 months to introduce baby food. Green beans was the first veggie of choice and he'll start peas tomorrow (ugh!) Doc says to get all the veggies in first before he gets fruits, or else he may never eat 'em. Maybe that's what happened to me... 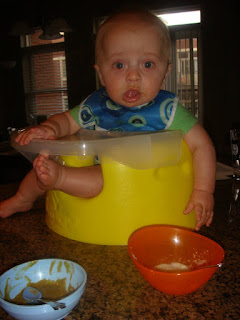 His days in the Bumbo are numbered... 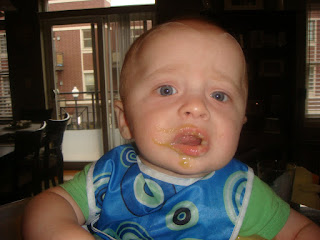 He liked the green beans, really! 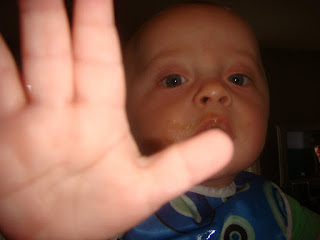 No more pictures, please!
Brady had a great 6 month check-up this week, even though there were more shots :( He weighed in at a hefty 18 lbs. 2 oz. (75%) and 27 in (75%). His head is still off the charts at 47.5 cm (100+%) but appears to be "leveling off". Baby's got big brains!! And even though the drool is abundant and the chewing is non-stop, Doc says she doesn't think a tooth will be poking through any time soon. Guess we'll have to keep waiting to see his first pearly white.

The last thing to note (then I'll end this entry, I promise), is that this week was our last week with Nanny Manny. My sister will begin providing in-home therapy for autistic children. While I know Brady is going to miss her, we wish her the best of luck at her new job and hope that she comes to visit often. After lots of searching and interviewing, we hired a new nanny, Linda (no, not Matt's mom), who will begin taking care of Brady on Monday. Matt and I felt a connection with her right away and look forward to having her join our "family". She promises to teach Brady Chinese (she's fluent), so he'll officially be smarter than Mom and Dad in approx. 6 months... :)

Ok, signing off. Hopefully it won't be another month before we update again.
Posted by Heather at 7:46 PM