TAT Link Up- A Day In The Life

This week's Toddle Along Tuesday topic is "A Day in the Life" and I thought it was perfect timing, because I have been meaning to do more snapshots of what life with Brady is like on this blog. We chronicled so much of his activity in his first year of life, but once he hit all his major milestones, we just stopped celebrating all the little stuff that makes watching him grow so exciting.

I write a lot of stuff down in his baby book, but I am literally running out of room, and what better place to do it than here?! Because I'll never remember the cute phrases he said, the books he read, or the "hot toy" of the moment 5,10, 15 years from now, no matter how hard I try!

Brady wakes up on his own between 7-7:30am and calls for Daddy. We're lucky in the fact that he actually stays in bed 'til someone comes and gets him, even though he is not in a crib anymore. He only wants his Daddy (which Mom can't complain about now... love me some sleep!) If I try to go in and get him, I usually am told, "NO, not YOU!! Go get Dad." A lovely way to be greeted in the morning, is it not?!

Because Brady is not a "morning person" (I wonder where he gets it?!), he takes some time to warm up to the day. This is usually done by watching a little bit of TV with a small cup of milk.

Breakfast is generally one of the following-- pancakes, oatmeal/oat bran, bagel & cream cheese or yogurt & granola. B is not a big cereal with milk fan, though he'll eat dry cereal with a cup of milk. Brady loves ALL fruits, so we will alternate between berries, bananas, grapefruit, kiwis and whatever else is left from the market.

After breakfast, Daddy heads off to work and Mom and Brady start their day together. Mondays, Wednesdays and Fridays we usually spend mid-mornings at the YMCA. Tuesdays & Thursdays Brady goes to school at Montecito from 9a-1p. We recently started taking him to "lunch bunch" at school and he absolutely loves it, mostly because he gets to play with the boys in the older classes. His favorite school buddies are Lyla (of course), Johnty and Lucas.

We like to spend time in the late morning having playdates with Brady's two best friends Lyla and Leo. We meet at parks and have picnics, go to fun places like the Children's Zoo in Palo Alto or Happy Hallow, or just play in each other's backyards (though we do NOT like sharing our toys very much). We also pass the time going to gymnastics, out for Jamba Juice, or hanging at the mall.

For lunch we typically alternate between peanut butter & jelly, grilled cheese, and bagels with cream cheese. Brady does not like deli meat with makes it hard to eat on the go (why won't he just eat a ham & cheese sandwich??), though he LOVES provolone cheese. Asks for it (almost) every day.

Naps are 50/50 these days. Brady has always been a good sleeper, so if I can get him to actually fall asleep, he'll generally nap for about 2-3 hours (around 2pm-4ish). But some days he just lays in his bed and plays with the 300 stuffed animals in there and refuses to calm down enough to catch some Zs... Boo.

Afternoons are tough. If he naps then he usually wakes up just before I'm ready to start making dinner, so we don't have much time to go anywhere or do anything. He'll watch a little TV (again, slow to wake up), then come into the kitchen to sit at his craft table and color while I finish up cooking. He loves writing in his notebook and actually has a really good grip on his pencil. We practice shapes and letters, and while he doesn't have quite enough control yet, he is starting to get good at tracing and can color inside the lines (in large spaces, of course). I think it's only a matter of time before we get a letter or two under our belts.

Matt works late two nights a week, which means Brady and I are on our own for dinner. We'll typically go out for "date night" one of these nights-- Brady's favorite hot spots are Pizza My Heart and Armadillo Willy's (bbq). The other nights, we are able to eat as a family and it's definitely my favorite part of the day. Brady loves to tell Daddy all about his day; he usually doesn't stop talking!

After dinner it's time for more play. Thankfully the weather is warming up because Brady loves to play a wide variety of sports-- soccer, baseball, golf, lacrosse & football. He is getting really good at baseball and can actually hit a ball when Matt pitches it to him. It's amazing!!

We start the bath/bed routine around 7:30pm and it can take about an hour (45 mins if Mommy's doing it!) Brady still loves being read to, so he gets 2 or 3 books in his rocking chair, a story from Daddy and a song from Mommy in bed. He'll call us a couple of times to come up and check on a stuffed animal or to blow his nose, and I swear he has to go "pee pee" about a handful of times before he finally settles down to sleep... sometimes not until 9:30pm (gasp!)

Then we wake up and do it all again! A Day in the Life of Brady. 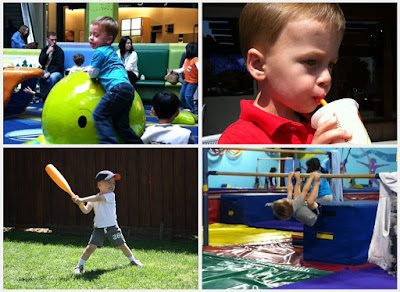 Thanks to Mama G at Growing Up Geeky for suggesting this. I look forward to doing something like this on the blog every month!

Email ThisBlogThis!Share to TwitterShare to FacebookShare to Pinterest
Labels: A Day In The Life, Brady, Growing Up Geeky, life with Brady, Toddle Along Tuesday