Entrepreneurship-- It's In His Blood

Well, it's in everyone's blood here in Silicon Valley, really. Especially in Brady's buddy Leo's parents, who actually came up with the idea to get the boys together and build a lemonade stand.

Truth be told, the Daddies ended up doing all the construction, but I don't think they minded. The stand itself turned out really cute (think Lucy's psychiatric booth from the Peanuts cartoon) and has turned into quite the playdate hit in the Kirkpatrick's backyard. Christy, Leo's Mom, found some super cute lemonade stand accessories at Target (loved the little yellow aprons!) and the boys looked so adorable flagging down "customers" and yelling out "lemonade!!"

Brady wasn't as interested in the lemonade business as Leo was, but he did have a good time scooping ice into the cups while Leo poured. They made a great little team! I about died laughing when after buying my cup of lemonade, Brady said, "thanks for stopping by Mom". Hilarious!

The boys set the price at 25 cents a cup, so the profits were slim. Let's just say I don't think they'll be getting any startup seed funding from the local VCs anytime soon. But Brady walked away with 4 quarters and you would have thought he won the lottery! We went straight to Target and bought a box of-- you guessed it-- 5 Hot Wheels (price: $4.99, so somehow Mom & Dad lost out on that one).

We are planning to host the next lemonade stand at our house later in the summer, so if you're in the neighborhood, please stop by and buy some delicious local, organic, fresh-squeezed-by-Pete lemonade (never from concentrate!) for 50 cents a cup. Hey! Gas prices aren't the only things that goes up in the summer! 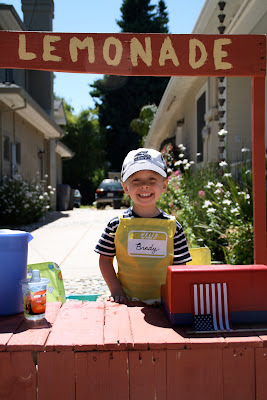 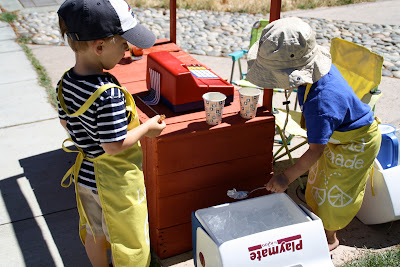 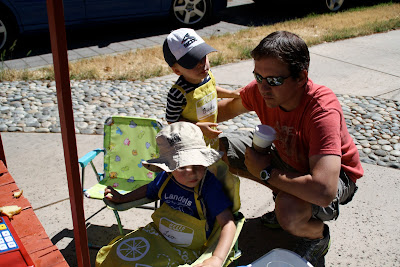 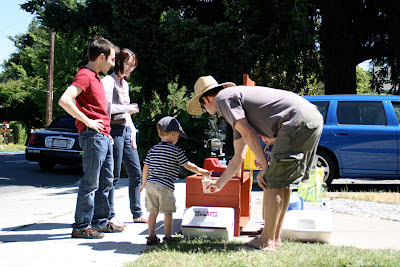