Well, our baby boy is 2. Two! I can hardly get that out without needing a tissue.

I can't believe it's been a full year since he turned 1, but a lot has happened over the last 12 months...

Brady learned to walk faster, then run. Then run fast. And fall. He learned what a band-aid was. He stopped drinking formula. He stopped using bottles (yeah!!!!) He got to see a whole new world when we turned his car seat to face forward. He traded in his high chair for a booster seat at the kitchen table. He learned to eat with a fork and drink out of a "big boy cup". He spilled, a lot. He learned to "keen up" after his messes. He learned a million new words, then how to string them together. First two at a time, then three, then more than we could count ("Brady wake up, go downstairs, eat breakfast, watch Caillou.") He learned to count to 13 and say his ABCs (sort of). He developed manners. He learned his prayers. He could spell his name at 18 months. He discovered trucks (oh my goodness, the trucks!) and dinosaurs. He could tell the difference between a triceratops, pterodactyl, and cryolophosaurus. He stopped eating vegetables. And chicken. And eggs. And even a few fruits. Then started eating them all again. He discovered that he loves Mom and Dad's singing voice. He gained a new appreciation of books. He made a bunch of new friends-- Chapin, Amelia, Bella, Lyla, Bella, Leo... Caillou, Dora, Curious George and Kai-lan. He started using the potty. Ok, he starting sitting on the potty. He learned to throw toys and tantrums. He met the naughty step. He started going to school. He started learning Spanish. He started getting attached. Really attached. He learned to play pretend-- chef, construction worker, train conductor. He even grew... a little.

That's a lot of action for a little guy, but he did it all (and more!) without skipping a beat. We can't wait to see what the next year brings. 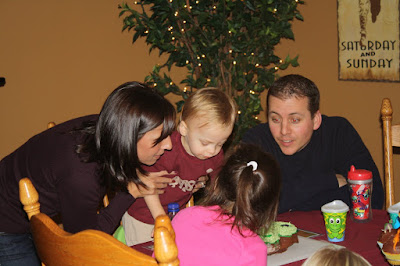 May all your wishes come true!
Posted by Heather @ Mama Dish at 4:08 PM