Cole Turned 4 Months (A Month Ago!) 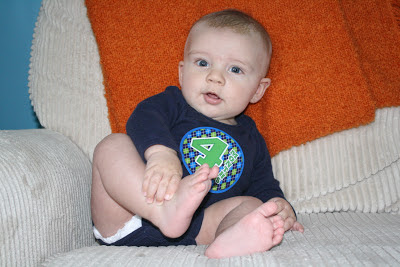 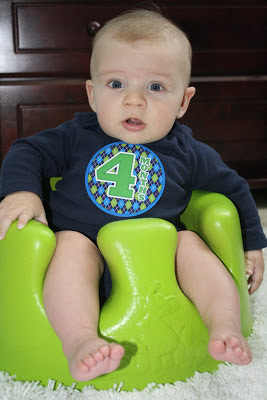 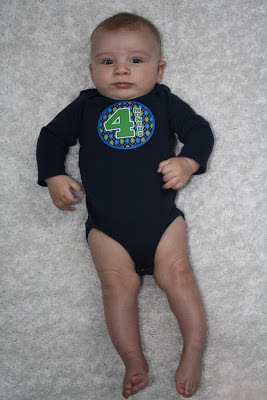 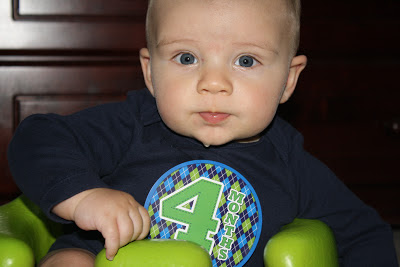 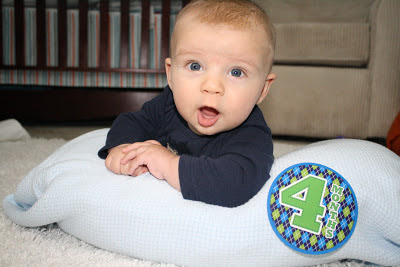 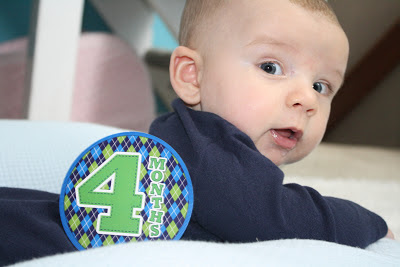 Teeth- None yet, and the doctor said she doesn't feel any coming up. He's still a drooling fool though and will gnaw on anything he can get his hands on.

Sleeping Habits- Just saying the words "sleep" and "Cole" in the same sentence brings on a ton of anxiety! With an inconsistent nap schedule and frequent night wakings, sleep has not come easy around here the last month or two (and makes for a super cranky Mommy!). Without knowing if it's a behavioral or medical issue (he's still taking 2 ml of Zantac 2x a day for acid reflux), we are just trying to "coach" him into falling asleep by himself by putting him down for naps/bedtime drowsy but awake. This is supposed to help him transition from sleep cycles on his own, without needing to be rocked or fed. Sometimes it works, and sometimes it doesn't (50/50).

To deal with the frequent night wakings, we have set designated eating times for him (midnight and between 4-5am) and are trying not to feed him at the other times (we cleared this with his doctor). Consistency is key... so Matt has become "official night soother" when he wakes at off times. God bless him for that; I just don't have the willpower to not pick him up and rock him back to sleep. Thankfully, he seems to be learning to rest a little better. Fingers crossed we are finally on the right path!!

Goes down for another nap 2 hrs after he wakes from his morning "nap" (usually between 11:30-12). Sometimes he'll sleep for 40 minutes, and sometimes I get really lucky and he sleeps for 2 hours. We never know what we're going to get!

Takes a short afternoon nap, again about 2 hours after he wakes from his lunch nap (usually 30-45 mins)

Bedtime routine starts at 6 on the dot (so we can establish a 7pm bedtime). Bath, lotion/massage, pjs, singing, bottle, book and bed.

Wakes to eat around 12 and again between 4-5am. Hopefully he'll drop one (and then both) feeding soon. He has slept through the night one a couple of occasions over the last 2 months, so we know he can do it!

Vocal Skills- Just the same "goos" and "gaas", but they sound wonderful!!
Posted by Heather @ Mama Dish at 9:56 AM