The holiday season is a busy time for everyone, but at the Eatherton household, we get to "relax" the day after Christmas with a birthday celebration every year! Things have been a little bit easier now that we're having Brady's kid birthday party in the summer (on his half-birthday), but we still want to celebrate the birth of our first born son the good old fashioned way... with pizza and cake (and, of course, singing)!

This was the first year we were not in Chicago for Brady's birthday, and Matt even had to go to work :( But we decorated the house and made him a special birthday breakfast (pancakes ala Daddy). Matt came home early and Brady opened gifts and cards from his family. Then we met up his best buddies Lyla and Leo for dinner.

Even though Brady was a little unsure if he wanted to wait until June to have his birthday party, I still think it's a good idea to space it out from Christmas (not to mention most of his friends have birthdays in Dec & Jan as well). I have a feeling he'll be happy as a clam in a few months when we get to celebrate his special day all over again!

It seems a little cliche to say "Oh, I can't believe my baby is 4!", but people say that kind of stuff for a reason. Time really flies when you become a parent. I simply cannot believe that it's been 4 years since the first time we held him in our arms (though most days you'd think you were talking to a 13 year old, I swear!) Not only is Brady incredibly smart and talented, but he is outgoing, warm, caring and so, so, so much fun to be around. He loves to dote on his baby brother and I've been told by many different people that there's just something really special about our little boy.

His Mom, Dad and Cole love him to the moon and back. He really is something.

Brady's 4 year check up is next week, so I'll update the blog with all his official stats at that time, but here are a couple fun facts about our now FOUR year old...

- Brady attends school 3 days a week and stays after for Lunch Bunch and Afternoon Enrichment. He loves going to school and I've never heard him say once that he didn't want to go.

- His favorite breakfast food is Oh's cereal. Lunch is PB&J. Dinner is a touchy subject... but I'm guessing he'd prefer to have pepperoni pizza every night if he could (or chicken fingers, just like his mama!)

- Brady can write his name, along with Cole's and the names of his friends Leo, Lyla, Halle and Bella.

- Brady's favorite sports to play are soccer and baseball. And man, can that kid swing a bat!

- Brady's other current interests include: collecting "treasures" (rocks, leaves, and other misc. items he finds in the sand at school), coloring or "doing projects", playing Angry Birds on the iPad, playing "educational games" on the iPad, dancing to Gangnam Style, making his baby brother laugh, riding his balance bike, going to Starbucks with Daddy, talking in gibberish, and playing roll call with the 40 stuffed animals that sleep with him in his bed. 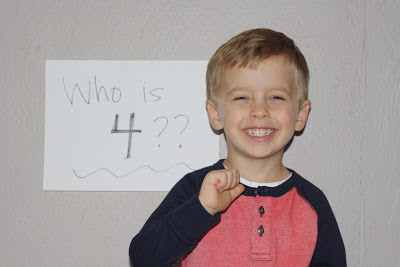 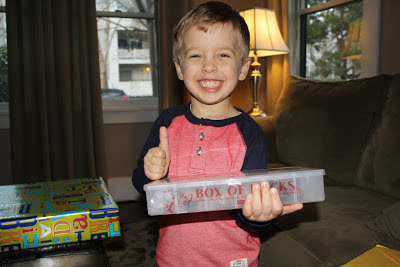 LOVING his "Box of Rocks" from Aunt Lindsay & Uncle Jason 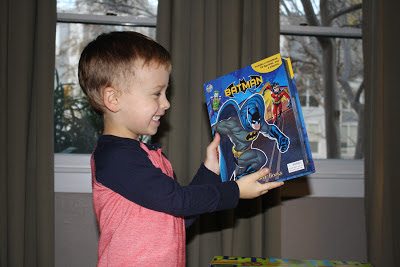 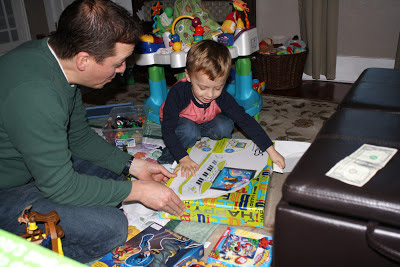 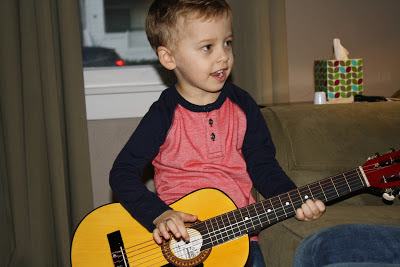 Getting his groove on with his new guitar from Mom & Dad 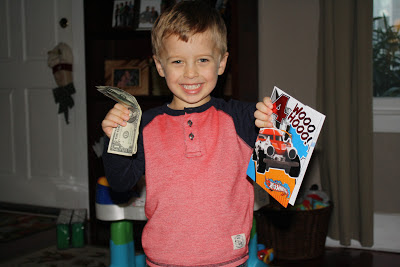 Thanks for the cash Aunt Sue & Uncle Brad! 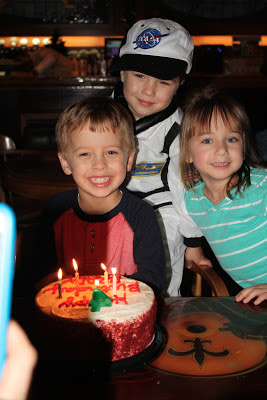 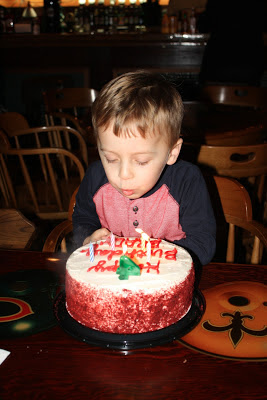 Happy Birthday Buddy!
May all your dreams come true.
xoxo
Posted by Heather @ Mama Dish at 12:08 AM