Halfway to One! Cole is 6 Months old. 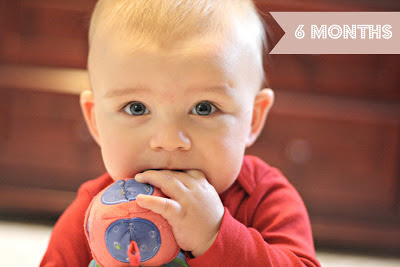 Why is it that I only seem to post when one of my kids is celebrating a "birthday"?! Must correct that. But, at least I'm chronicling the important stuff, so yay Mom!

Yesterday, our little Cole Bear turned 6 months old. I cannot believe he is halfway to one! He has grown and developed so much in the last 4 weeks, it's almost like he's a completely different kid. I can only imagine all the new things he'll be doing in the next 4. I am saddened and excited for this, all at the same time. I find myself missing a snuggly little newborn some days, but let's be real, this kid has never really been "little". It's almost if he came out of the womb looking for a turkey drumstick...

Speaking of turkey drumstick, our big boy has been going to town on solid foods and has the stats to prove it. Let's get into the details, shall we?

Height- A long (but not necessarily lean) 28 inches. This puts him in the 94th percentile!

Clothing Size- We are up to a new clothing size, again. Cole is comfortably fitting into all of his big brother's 9 month clothes, and could probably get into a few 12 month items as well. Again, this makes me sad because there were so many adorable 6 month outfits that he never even got a chance to wear. I have a feeling this will be the same for the 9 month lot, unless his growth slows a bit.

We may be in trouble when it comes to hand-me-downs as Brady's 12 month clothes are mostly pants and sweaters (think December in Chicago) and Cole will be looking to show off his milky white thighs in some shorts here very soon!

Teeth- Still nothing popping through, but his bottom gums look a little swollen to me. Brady got his first tooth at 7 months, so we shall see!

Still having trouble in this department, but we are diligently trying to get him to be a better sleeper. We are following the "2 hour window of wakefulness"for naptimes to a T and this seems to be helping a bit. We do a solid 20-30 bedtime routine each night which helps him go down easily on his own... most nights. The one thing we haven't been able to tackle is the night wakings. He's still up 2x a night looking for food (around 12-1am and again around 4-5am). At his doctor's appointment yesterday, I got reassurance that he does not need to eat this much overnight and that this is likely a behavioral issue. We are going to start "night weaning", but reducing the number of ounces in one of his bottles a little bit each night. Over a week to two weeks, Cole should hopefully drop one of the wakings on his own because he'll only be getting a very little amount of formula at that time.

Feeding- Cole gets about 36 oz. of formula each day (6oz/6x/day). The doc says once we wean him off one or both of the night feedings, his daytime bottles will likely increase so he continues to get the same amount.

He is still loving (most) solid foods! Rice cereal is still a staple morning and night, but I'm hoping to get him off that now that he can eat more iron-rich foods. Favorites of Cole's include bananas and peas (not together :)). I recently purchased the Baby Bullet and am excited to start making all of Cole's baby food from here on out, now that he's 6 months old and can start trying a bunch of new things.

Daily Activities- Daily activities are still pretty much the same-- hanging in the exersaucer, playing on the floor on his belly, and watching his brother and Tinley. He loves stacking rings, chewing on Sophie, and playing with tags. I cannot wait for our new highchair to arrive so he can sit in it and play while I'm cooking!

When we take walks while Brady is at school, Cole has started sitting in the stroller seat (vs. his car seat). He loves being able to look around more and seeing all the people, cars, trees, etc. We're going to need to buy another seat soon or kick big brother out of the stroller for good!

Speaking of car seat... now that Cole is pushing 20 lbs, it is getting harder to carry him in the bucket car seat. We transferred Brady to the convertible car seat at 10 months, but I have a feeling Cole won't make it that long. That is crazy!!

Mobility- Cole is a rolling fool. Front to back, back to front. We lowered his crib mattress two weeks ago (it had been on an incline for his acid reflux), which allowed him the opportunity to roll around in bed. And roll around he did! At first we thought maybe he'll discover that he loves sleeping on his belly and we'll finally get a full night's sleep... but that was not the case. Turns out he isn't happy about being on his belly in his bed at all. Every time he'd roll over he'd scream bloody murder until we rolled him back on his back. Thankfully, now he'll roll himself back over if he finds himself on his belly, but he has been known to sleep on his side from time to time.

He is doing a much better job sitting up on his own for longer periods of time. In the next week or two, I'm sure he'll be a "sitter" for real. So exciting!!

He is also gearing up for crawling already. For real. He can move around in a circle pretty quickly, and combines this skill with rolling to get him all around the floor. But in the last day or two, he has been kicking his legs, pushing up onto his knees, and trying to launch himself (almost like a frog) to move forward. It is hilarious and scary, all at the same time! Brady started crawling at 7 months, so I'm sure Cole isn't too far off. Yikes!

Vocal Skills- Cole has definitely found his voice this month! He is babbling a ton, blowing bubbles and doing raspberries, and squealing. He is starting to repeat various sounds, like "hi" and "gah". We are working on Ma Ma (of course) and Da Da, but that might take a little while. That's okay, his big brother does enough talking for the entire family!

Taking his monthly photos have become a bit of a challenge now. When I put him on the rocking chair he wants to launch himself off, which gives me a heart attack. And the stickers?! Forget about it. He knows what they are and all he wants to do is eat them... 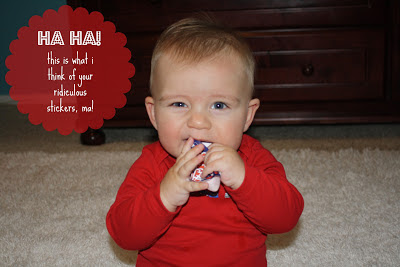 But I was able to get a few good shots yesterday, so here you go! 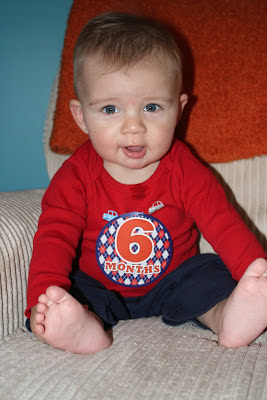 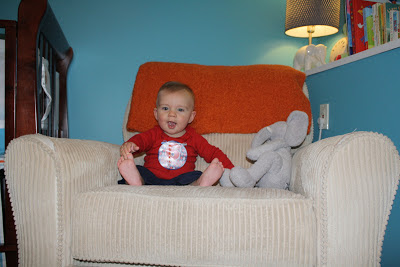 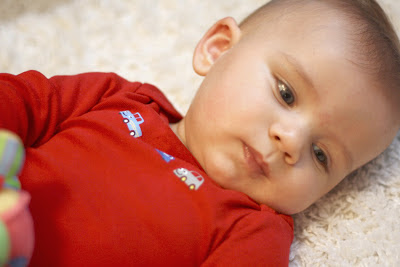 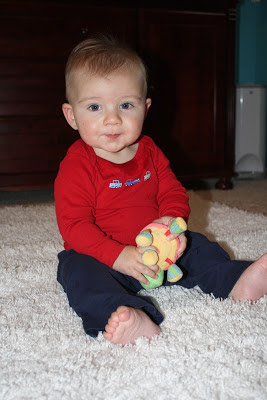