Haven't posted in a little while, so I just thought I'd catch you up on what's goin' down...

First, Grandma Linda came to visit! It was just for the weekend, but we're always happy to see her. Cole was a little unsure of who she was when she first got here, but he quickly warmed up to her and he and Brady were sad to see her go on Sunday. We all went out to dinner and Cole sat in a highchair and ate spinach! It was very exciting. The highlight of the evening was when Brady asked us, "our waiter is very pleasant, isn't he?" I don't know where he gets this stuff. 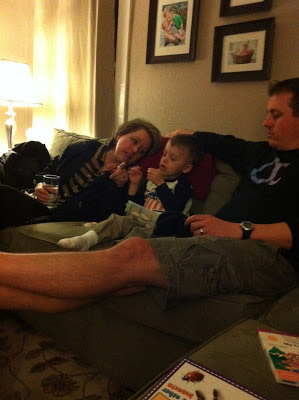 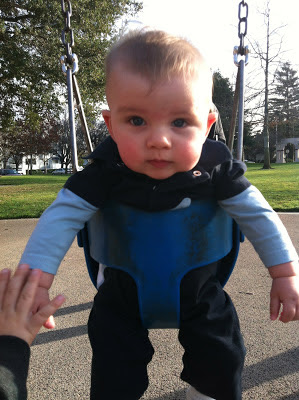 Grandma pushing Cole in the swing 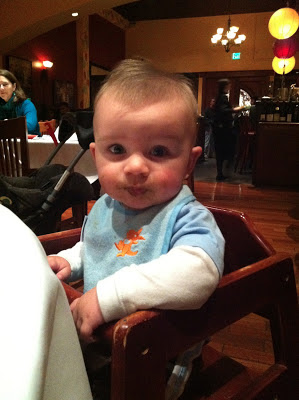 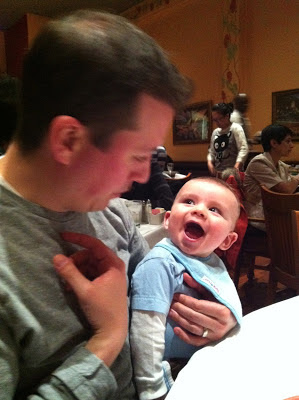 
Right after Grandma left, the cold bug invaded the Eatherton household. Somehow, Matt got it first. Then Brady. Then Cole. Then Me. Then Matt, again. Nothing too serious, just low-grade fevers, sore throats, and lots and lots of boogies. I am not joking at all when I say we've gone through about 10 boxes of Kleenex in the last 2 weeks!

It's so funny to hear Brady talk about us being sick... he thinks there's an actual bug that is going person to person in this house. "First, the bug went into Daddy's mouth and got him sick in the throat. Then, the bug came into my throat and got me sick. Then, the bug flew into Cole's mouth..." Could you imagine if that were really what happened?! Yikes. I just hope the cold bug flies itself right out the front door because I am done wiping noses around here! If we're all due for a round two like Matt, I'm screwed.

Do you know what a cold does to a baby who is a poor sleeper?? It makes them an even worse sleeper, especially when you throw teething into the mix (there are tiny white spots on his bottom gums, so they are on their way!) Cole has been waking up multiple times a night for the last week and we've been very attentive to his needs since he hasn't been feeling well. Looks like we'll be starting back at square one with sleep training (again!) once he's well. Wish us luck!

Now don't go thinking that an illness and lack of sleep will keep this baby down. No way! This week, Cole decided to become a bonafide sitter (one that rarely tips over) and clapper! He doesn't do it on command just yet, but we catch him having a private clapping moment with himself every now and again. It is so cute! He is also starting to wave hi/bye/night-night and rock on his hand and knees. I imagine it won't be too long before he's crawling. Brady better hide his good toys now! 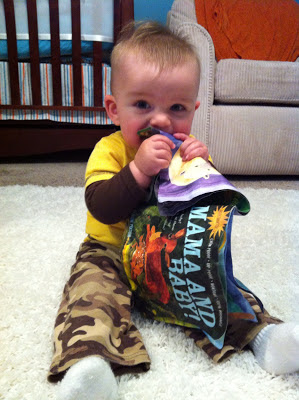 Speaking of Brady, he's been very busy at school lately. He's gotten very interested in "art" and started taking a hip-hop dance class after lunch. Don't ask him to show you his moves though, those are for school only. Also, I think he has a crush on his dance teacher! We've been busy making his valentines for school, which he'll pass out on Wednesday during his Valentine's Day party. We'll be signing him up for t-ball for the first time next week and he is really excited. I can't wait to see him in his first "game"! 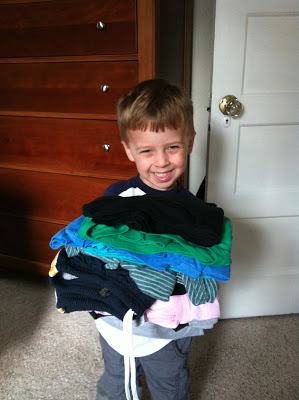 The cutest laundry helper in the world!

In other news, our niece Reese turned one this past week and we were sad to miss her first birthday party. Sounds like she had a wonderful time and enjoyed her cake. We look forward to being at all the parties in just a few years! And my sister and Tim signed on a reception hall in Rosemont and finally picked a date-- June 28, 2014. We can't wait!!
Posted by Heather at 1:31 PM