Technically, today, Cole is 3 months and 1 week. But these photos were taken on the 24th, so this post is still totally legit. The reason for the delay in this post?! Cole. Poor little guy has his first cold and we believe he is cutting his first tooth as well (or he has a runny nose caused by teething). Who knows anymore?! Either way, Cole is not a happy camper lately. He is barely eating and barely sleeping. This is causing a lot of stress on his Mommy! He is currently taking one of his "famous" 25 minute naps right now, so I'm trying to type this as fast as I can!! 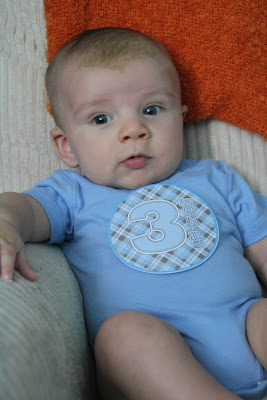 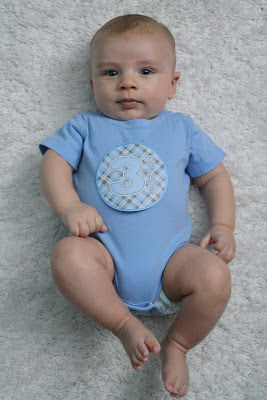 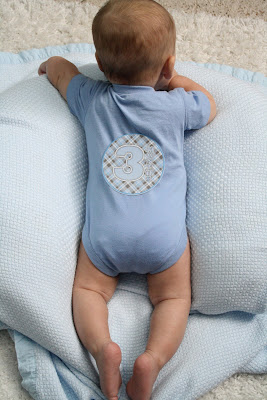 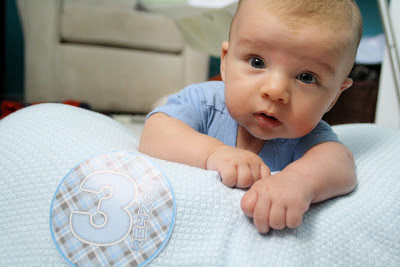 Because Cole doesn't have a doctor's appointment at 3 months (he goes back next month), I don't have formal stats to report this month. What I can give you is his height and weight, as measured by Mom & Dad. I also want to start sharing more specific details about his behavior each month, so we can use these posts as references for the future. You know, if we're ever CRAZY enough to bear more children :)

Clothing Size- We just packed up pretty much all his 0-3 month clothes, so he's officially in 3-6 months.

Teeth- None, but we think he is actively teething. He is constantly soaked in drool and everything goes into his mouth (hands, blankets, toys, etc.) We finally broke out the Sophie teether from Aunt Nina and he seems to really like it. He has a very small white speck on his bottom gum, so we keep watching to see if anything sprouts up!

Sleeping Habits- No real pattern/schedule yet. He was a great sleeper around 6-9 weeks, then at 10 weeks, everything went haywire. Now he's up at least once a night (sometimes 2 or 3 times). He goes down for "bed" around 8-9pm and generally wakes up around midnight and/or 2am, but can be soothed back to sleep with a pacifier. He'll wake again sometime between 3-5am and needs to be fed. He wakes for the day anywhere between 6:30-8am. For the last 4 weeks, he's been taking terrible naps (approx. five 25-40 minute naps a day). We were trying to "sleep train", but then he got sick/started teething. I hope to get into some sort of a schedule soon!

Cole started sleeping in his crib overnight on Oct. 13 (at almost 12 weeks). He had been taking some naps in his crib at this point, but we made the full switch over and I'm happy to report that the Pack 'n Play is packed up and put away. We now have 6 more cubic feet in our room (which surprisingly makes a HUGE difference!)

We went back and forth about whether or not Cole still needed to be swaddled to sleep and decided to stop at 13 weeks. He was fighting us every time we wrapped him, though he seemed to sleep better with it. We made a "soft transition" by swaddling him for a few days with his arms out. Then, we stopped altogether. It took a couple days, but we think that he's settled into his swaddle-free way of sleeping just fine. We do use a sleep sack though, so he can stay warm.

Cole doesn't care much for his pacifier, unless it's time for bed. He seems to soothe himself better when he has his paci in his mouth and his Little Giraffe lovie in his hand. We see him forming the same bond with his blankie as his big brother.

Daily Activities- Cole HATES tummy time. He actually screams at the ground during it! Not in an uncomfortable crying sort of way, but in a "damn you tummy time, arrrrggghhhh!" kind of way. He gives us all a really good laugh when he does it. He'll generally roll himself over about 10 seconds after being on his belly. I have no idea how we'll get him to build up his arm strength!

He is not short on neck strength though, that's for sure. He has full support of his head and can sit supported in his Bumbo. He pretty much refuses to sit in a semi-reclined position and always strains his neck to sit up. He is in such a hurry to grow up!!

Vocal Skills- Lots of "oooh", "gaaah", and squeals. He likes to have little chit-chats with Matt and I when he's on his changing table. And giggle!! Cole is great at giggling. No full blown laughing spells yet, but he gives out little giggles every time he is tickled (under his arms and on his belly) and Brady can usually always get him to chuckle with his crazy antics.

So that's what's going on with Cole Bear at 3 months. Stay tuned for his formal stats at 4 months... his next doctor's appointment is on my birthday!