Cole had his 2 month appointment on Wed., and because I'm terrible at making appointments, he was actually 2 months and 8 days. Oops. Guess that explains why he tipped the scales... again. 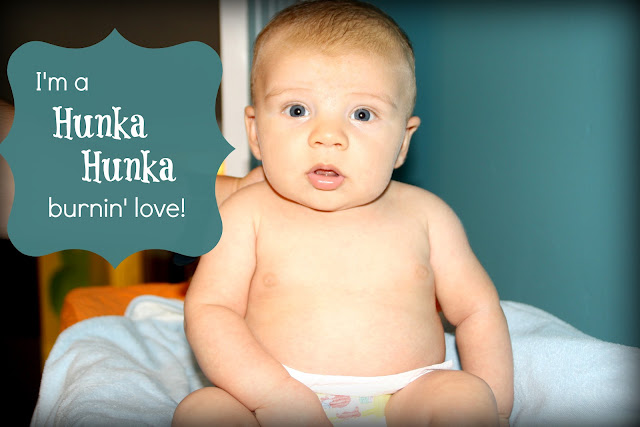 Because I totally underestimated his size at his first month check-up, I was a little more generous with my 2 month prediction, and I was almost spot on. My guess was 14.5 lbs and Cole weighed in at 14 lbs 2.5 oz. This puts him in the 86th percentile for weight, which is something his big brother has never made it to! He also measured at 25.5 in in length (90%) and his head was (surprise, surprise) in the 99%! Hey, at least his big noggin is actually in proportion to the rest of his body!

{We learned just after his appointment that he weighs only 8.5 oz less than his cousin Reese... who is 5 and a half months older than he is. The boy is a moose!}

Cole received 2 shots (4 vaccinations) and the oral Rotovirus. He was NOT a happy camper-- thank goodness Matt was there to help him (and Mom) get through it all. I am such a baby when it comes to shots. But he did fine the rest of the day and even took a 3.5 hr nap.

Our next visit to the doctor isn't until 4 months, but we'll do our own at-home assessment and let you know how he's coming along. My guess is that he's on the fast track to double his birth weight way before 6 months. Size 3 diapers are just around the corner!